Fake news and extremely left or right news has bombarded social media, and what truly scares me: the number of people–people I respect as intelligent beings–who are reposting it and using it to support arguments.

My fear has prompted me to put together a fake news unit to piggyback onto my college composition research unit and my Brit Lit satire unit. Here’s a rough rundown.

I introduced the idea of fake news through one of the several fake news quizzes online. I’ve used this one from the BBC today. Then students read two articles at the Actively Learn website and answer questions embedded in the article. Article 1 is Fake News Fools Millions published in Scholastic’s New York Times Upfront magazine (subscription needed to access). The other is  Fake News: How a Partying Macedonian Teen Earns Thousands. At the end of the second article, I ask this question: Should Google & Facebook do more to restrict fake news? (Some of my students’ responses are here–I tend to publish top student responses on Google Slides anonymously for their classmates to peruse.)

I model examples of fake news and questionably slanted sites that I find on Facebook–yep, I use my own Facebook feed. This is one posted by–deep breath–a relative of mine. When I first show it, many of my students feel very supportive of the Mexico wall…and then they realize they’ve been had. The wall in the photo is in an entirely different hemisphere. 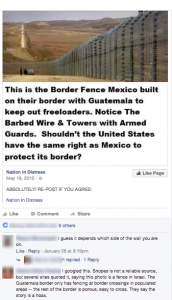 Then we look at some other examples on my feed that are very left-wing or right-wing (I’m a liberal living in a very red, conservative area–my feed runs the gamut of political views). I show them how to go the source’s FB page, then the website page. From there, the headlines and sometimes just the About page gives away if the site is focused on the right or left side of the political spectrum. I do the same with YouTube.

After this, students find a source on Facebook or YouTube and place it where they think it belongs on the political continuum. (We usually have to have a discussion where FoxNews and CNN lie.)

Reflection and evaluation. This can be as simple as discussion, as I did with some classes, or a practice ACT writing essay, as my Brit Lit students will do.

There are so many other ideas and options out there! Feel free to post any in the comments below.