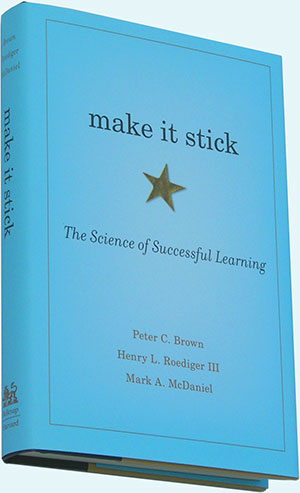 I started listening to this book last night during my evening walk (it’s available on Audible–check it out!), inspired by Jennifer Gonzales’ decision to use this for a July book club at Cult of Pedagogy. The book focuses on the neuroscience of learning, but it’s written in a conversational vernacular that made those segments of jogging during my walk a lot less painful.

In the first chapter, the authors discuss what activities don’t work for learning.  What stood out most for me:  Rereading and repetition, the two standbys of studying, are the most ineffective study skills.

1. Rereading. Studies have shown that rereading a text has little to no effect on learning. In an a controlled setting, researchers instructed one group of students to read a text once before the quiz, and the second group to read the text twice before the quiz. Both groups scored THE SAME. A third group reread the text a few days later before taking the quiz, and they performed slightly better than the other two groups. So all those teachers who told you to look over the material?  They were leading you down a primrose path of inefficiency.

2. Repetition. To clarify, this is repetition alone that is ineffective. For example, the authors describe a campus safety meeting where staff members were told to write down where the closest fire extinguisher was to their offices. A professor who couldn’t remember set off to his own office in an investigation. Turns out, the closest extinguisher was mere inches away from his office door–an office that he’d occupied for nearly twenty years! As the authors pointed out, repetition without any other way to make connections results in no long-term learning.

If you’re looking for summer reading, here’s your book. Or if you eschew reading for the summer, download the audio version (like me) and take a listen.