Review: An Indigenous Peoples’ History of the United States

This summer I have a renewed focus to not only increase the number of diverse titles in my classroom library but also become more familiar with those titles. After all, if we don’t haven’t read a book, it’s pretty hard to which students it will appeal to. Let’s start with this worthy addition to any humanities classroom.

Title: An Indigenous Peoples’ History of the United States (This is an Amazon link. I get nothing if you buy it. In fact, you’ll earn a lot more street cred if you buy it from your local bookstore.) 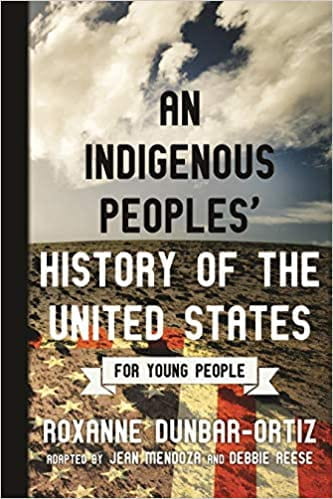 In the original book, Dunbar-Ortiz traces the history of the United States, albeit through an Indigenous lens, and Mendoza and Reese adapt and condense the book to make it more accessible to YA audiences. The book begins at the Europeans’ arrival in the Americas and continues through the gradual removal and destruction of Indigenous peoples as the white settlers claimed land across the continent. The authors lay clear many of the facts that are glossed over in traditional history textbooks, such as the pope’s Doctrine of Discovery to declare the Christian “right” to claim new lands for Christians, the devious plans of Jefferson to transform Natives into farmers and bankrupt them, and the torturous treatment of Indigenous peoples in the southwest by the church missions. The book ends with descriptions of protests and social activism, including the American Indian Movement and the Standing Rock protests.

Although I’ve taken several classes in American Indian literature, much of the information supplied in this book was not only new but downright shocking. Perhaps I was taught the Doctrine of Discovery in high school, but I’m fairly certain there was no discussion of the immoral use of religion as a way to claim inhabited lands. I’m also aware of Jefferson’s troubling ownership and use of enslaved people but not of his hushed plans to eliminate Natives through bankruptcy.

The destruction and genocide of Indigenous peoples continue throughout the book, and the authors not only remind readers of the events, but they provide extra information that impacts the context of the events. For example, most US citizens are well aware that the Second Amendment in the right to bear arms and form a militia; however, the authors point out that the purpose of a militia was not only to fight the British, but also to track down escaped Blacks and to murder Indigenous peoples. Extra information such as this is threaded throughout the writing, not just surprising me but also shocking me with the brazenness of white politicians of the time. The authors also provide examples of euphemistic language used by politicians to assuage concerns of white citizens–who, sadly, didn’t need much comfort since they, as Christians, already felt their supremacy over the Indigenous due to the Church’s Doctrine of Discovery.

In addition to the main text, the book is replete with sidebars that provide more content and often prod student thinking even further. One sidebar explained Washington’s work as a surveyor and how this role led to the destruction of Indigenous villages. Another sidebar described the “client class” found in some southeast Indigenous nations, which were comprised of members of the nation who had special privileges due to their cooperation with the whites. It was often members of the “client class” that signed treaties, and they did not represent the rest of their nation. When appropriate, maps, sketches, and photographs are included with the text and sidebar to provide visuals to readers.

This isn’t going to be a book that appeals to every student. It’s going to be a book for students who are history buffs, passionate about social change, and/or interested in the life and strife of Indigenous peoples. This is also an important book for educators to read, especially social studies teachers and teachers of Native students (but really–all educators should read this.) There are many points during an American history curriculum where excerpts of this book can provide an alternate lens of how the destructive actions of people of European descent irreparably harmed the Indigenous peoples who had already created their own nations and civilizations on the continents.

The Books We Tell Students to Read

Why You Should Read Balance with Blended Learning